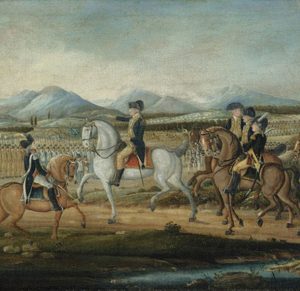 Cumberland and the Allegany region played a key role in the early career of George Washington. The Allegany Museum’s new first-floor installation will highlight Washington’s role in our region. The exhibition space will include a large-scale model of Fort Cumberland and other Washington memorabilia from the 1750s, encapsulating his career as a surveyor and his participation in the French and Indian War or Seven Years’ War. The footprint of Fort Cumberland, including the fort’s old tunnels, sits steps from the museum. The cabin that served as Washington’s headquarters, the only building to survive from the fort, sits in a nearby park.

Before Washington was a military leader and the first President of the United States, he was a surveyor, a profession he began at the age of sixteen. Surveying trips took him along the upper Potomac River and to the western edge of the British Empire in America, at that time defined by the Allegany and Blue Ridge Mountains. In the 1750s French military and colonists began moving down the western side of the Allegany and Blue Ridge Mountains, following the Ohio and Monongahela Rivers. France’s push to colonize the Ohio Territory upset British interests. In 1753, the 21-year-old Washington volunteered to carry a letter from the governor of Virginia to the French commander of newly constructed forts along the rivers asking the French to withdraw from the region. Washington’s diplomatic party left Williamsburg, Virginia, in October 1753 and traveled to Fort Le Boeuf near Lake Erie and back, making the round trip of more than 1,000 miles by horse, foot, canoe, and raft in about ten weeks.

Washington’s group passed through Cumberland, then a rough outpost called Wills Creek, on the 14th of November. To travel from Wills Creek over the Allegany Mountains, Washington’s party would have followed the Nemacolin Trail, an ancient Native American trail that connected the Potomac River and the Ohio and Monongahela River watersheds. This route had become established as a primitive road used by settlers and traders. When Washington returned from his trip he wrote a report, which was published in 1754 as The Journal of Major George Washington. It became widely read and included a map of the region he traveled, showing the placement of French forts and heightening British concern about French incursion. Even before Washington’s return, the governor of Virginia sent troops to build a fort called Fort Prince George at the junction of the Allegheny and Monongahela rivers in what is now downtown Pittsburgh.

Washington returned to Wills Creek in the spring of 1754 as a newly commissioned lieutenant colonel. Washington was on his way back to Fort Prince George with troops and supplies. Before he could leave Wills Creek, he learned that Fort Prince George had been attacked and captured by the French, who built a new fort called Fort Duquesne. Between May and July 1754, Washington’s regimen camped near the modern town of Farmington, PA where his troops built Fort Necessity and also began to widen the road west to transport almost 400 men and small cannon towards an attack on Fort Duquesne. On July 4, a much larger French and Indian force attacked Fort Necessity. Washington abandoned the fort and retreated to Wills Creek. That fall, Wills Creek became the site of a crude wilderness fort called Fort Cumberland.

In 1755, Washington was at Fort Cumberland as an aide-de-camp to General Braddock, who had been sent westward with some 2,400 men, supplies, and cannons to force the French from the Ohio territory. Braddock spent months widening and improving the road linking Fort Cumberland and Fort Necessity, intending to take the road through to Fort Duquesne where he would assemble and attack the French. However, the British column was surprised not far from Fort Duquesne and roundly defeated. They retreated to Fort Necessity where General Braddock died of his wounds.

With the formal declaration of war between the British and French in 1756, the war became known as the French and Indian War or Seven Years’ War. In 1758, Washington participated in a campaign under Brigadier-General John Forbes that finally drove the French from Fort Duquesne. Then, he retired from military life until the onset of the Revolutionary War.

Washington returned to Cumberland a final time in October 1794, this time as President and Commander-in-Chief of the newly formed United States of America. He came to review troops at Fort Cumberland, intending to march into Pennsylvania to suppress an uprising called the “Whiskey Rebellion.” Upon Washington’s arrival in Cumberland, the rebellion dissipated. It has been suggested that this act was a crucial early test of the power of the newly formed central government. 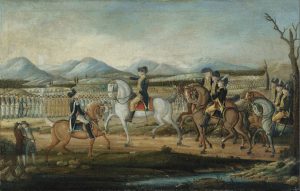 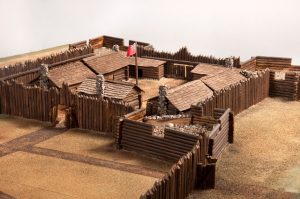 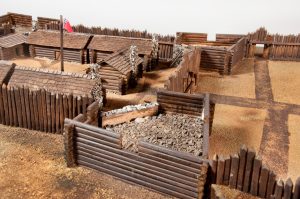 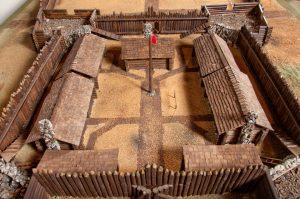 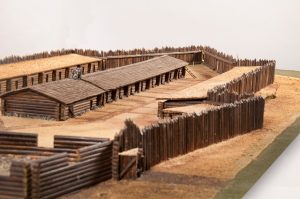 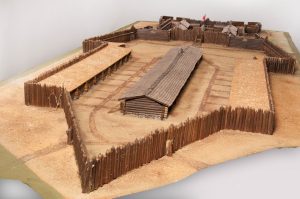 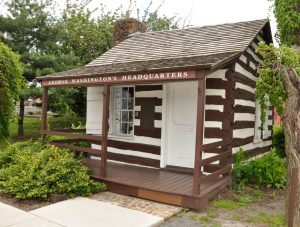