Allegany Museum honors Cumberland’s firefighting heroes with its exhibit of artifacts, vehicles, equipment, photographs, and a narrative of the story of fire fighting in Cumberland.
Cumberland installed its first municipal water system, including fire plugs and water mains, in 1872. Water was pumped from the Potomac River. A new system was installed in 1910 by damming Evitt’s Creek, in the nearby mountains of Pennsylvania, and piping water to the city. The system remains to this day.
In 1908, the volunteer fire-fighting system was replaced by a professional, paid fire department. Several pieces of the latest horse-drawn equipment were purchased. When it became available, Cumberland quickly adopted motorized equipment. This has been continuously updated and replaced over the years. The display illustrates the development of modern firefighting techniques.
Many large fires occurred in glass factories. In the early 20th century, Cumberland had over 30 different companies. Many burned to the ground. You can see a comprehensive exhibit of Cumberland Glass at the Allegany Museum, on the same floor as the firefighting exhibit. 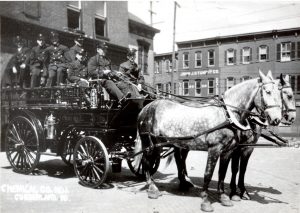 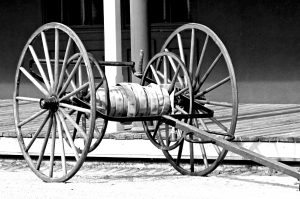